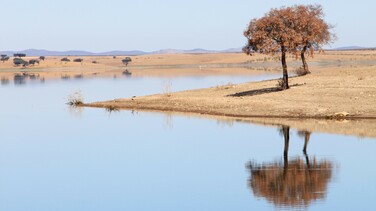 The National Roadmap for Adaptation 2100 project - Assessment of the vulnerability of the Portuguese territory to climate change in the 21st century (RNA 2100) defines narratives of the evolution of vulnerabilities and impacts of climate change, as well as the assessment of the need for investment for adaptation and socio-economic costs of inaction.

The RNA 2100 thus supports and responds to public policy initiatives on adaptation to climate change at the various levels of territorial intervention, being also supported by initiatives to disseminate results, including to the general public, with the ambition of becoming an important enhancer for education and awareness on the issue of adaptation to climate change.

The RNA 2100 project brings together knowledge from diverse institutions, in order to ensure that all relevant areas are considered, namely the Portuguese Environment Agency (APA) as project promoter, Banco de Portugal (BP); the Directorate General for the Territory (DGT); the Faculty of Sciences of the University of Lisbon (FCUL); the Portuguese Institute of the Sea and Atmosphere (IPMA) and the Norwegian Directorate of Civil Protection (DSB).

The project started in September 2020 and is expected to be completed in December 2023.

The identification of climate vulnerabilities at the national level was carried out in the context of the project "Climate Change in Portugal: Scenarios, Impacts and Adaptation Measures" (SIAM), developed in two phases, completed, respectively, in 2002 and 2006 (project conclusions available at: http://cciam.fc.ul.pt/prj/siam), that is, for more than 10 years. Therefore, it is essential to carry out the assessment of climate vulnerabilities at a national and regional scale (which are extreme events, such as heat waves, precipitation and extreme winds), in order to ensure the socio-ecological resilience of territories at different levels of planning and management. With the preparation of the Action Program for Adaptation to Climate Change (P-3AC), approved by Council of Ministers Resolution No. 130/2019, it was possible to identify the main impacts and vulnerabilities of the territory, namely:

An important component needed is related to the social and economic impacts of climate change in the national territory, which are not sufficiently studied and which require the development of appropriate methodologies.

The assessment of vulnerabilities will be carried out by:

In view of the above, the following actions will be supported:

Do you want to ask us a question?

Send us a message using this form. Or you can find our contact details here.

We will be brief in answering your questions.